What the Pantheon in Ancient Rome might have been used for

The Pantheon in Ancient Rome is one of the most visited sites in the area. It is an example of the incredible skills of people at the time to be able to design and create these amazing structures. It is built for an early form of Concrete (just another thing we have to thank the Romans for). It’s size and scale is impressive, considering they wouldn’t have had access to a Davit Crane like we do today for working at heights and transporting materials. 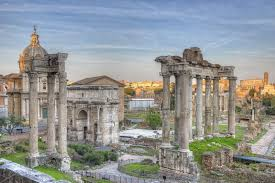 The building dates back to 125CE which makes it over 2000 years old. It’s original purpose is not fully known but by looking at buildings that look similar in the area and researching the buildings that were in place on the site before, it is thought that it was probably a temple.

This would not have been a temple in the religious sense but as a place in which the Emperor at the time, Hadrian, would meet with the public in a building that would have helped to cement his status, with symbols and statues around of Gods, Goddesses and other significant Emperors. Texts written at the time have described how statues of Mars, Venus and Julius Caesar would once have graced the inside of the Pantheon.

Hadrian liked to show some respect to those that had commissioned buildings and the Pantheon is no different. On the original site where the Pantheon now stands another building commissioned by Marcus Agrippa stood. There is an inscription on the current Pantheon dedicating the building to Agrippa.