Do You Know Your F1 Flags?

One of the iconic images of Formula 1 motor racing is the chequered flag being waved at the drivers as they pass the finishing line. The winner obviously sees it first, though it will also be waved at every subsequent driver to let them know that their session has also finished.

Flags are an effective way of communicating with all the drivers, who are travelling at high speed, and even with all the modern technology available, there is no better way of letting everyone know a simple message.

As with conventional traffic lights, F1 uses red, yellow and green flags. The red flag lets all drivers know that the race has been stopped for some reason, usually an accident, but sometimes for bad weather and conditions.

Yellow conveys danger and tells drivers to slow down. If there are two yellow flags at the same point, drivers should be ready to stop. In either scenario, overtaking is not allowed.

Green, as you might expect, indicates that everything is clear and yellow warnings have been lifted. Whatever the potential danger, it’s now passed. 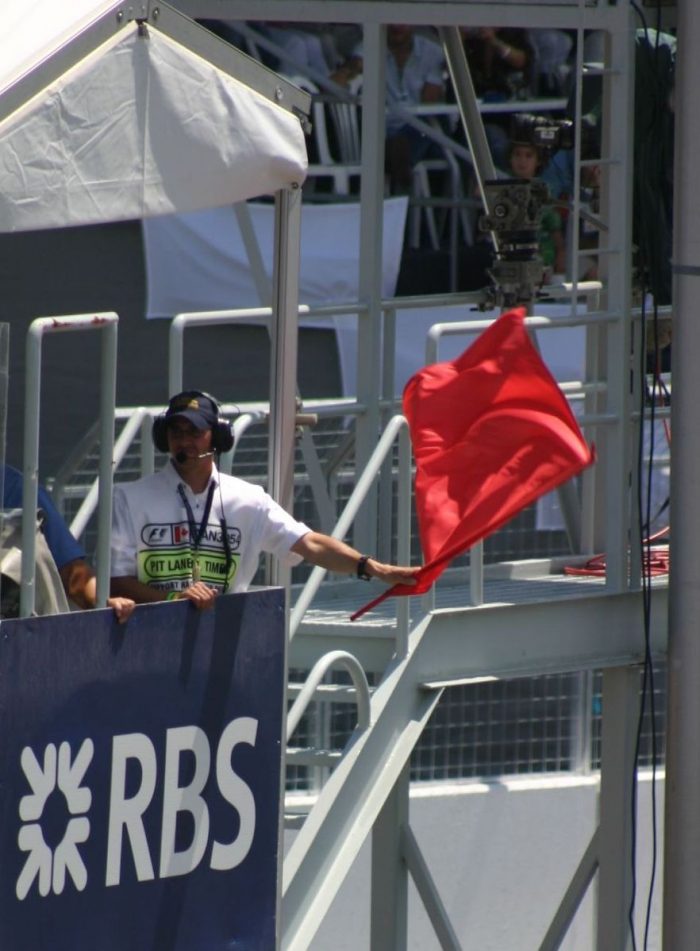 A yellow and red striped flag indicates a slippery surface ahead, and a white flag, rather than surrender, warns of a slow-moving vehicle on the track. A blue flag tells a driver that he is about to be lapped and that he should allow the quicker vehicle to overtake.

If a flag is accompanied by a number, it is a clear message to the driver of that vehicle. A black flag with an orange circle is a summons to the pit for a mechanical issue, though a black flag on its own, whilst also an order to return to pit, usually means a disqualification.

The BBC has a very succinct guide to cover all the most-used warning flags. If you’re at the event as a spectator, they’re also a great way of letting the crowd know what’s going on any keeping everyone up to speed.

Although it’s unlikely that you’ll see all the flags in a single race, it can be fun ticking off those you do see!