In line for the Master of Coin 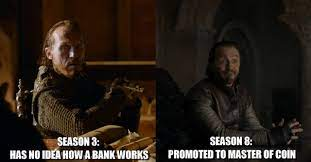 The book and TV series have subverted much of our perception of Medieval Fantasy. So used to the erstwhile and honourable, plus physically emotionless, heroes that Tolkein gave us in Gandalf, Aragorn and the rest, that it’s come as something of a shock. The literal fantasy world has followed Tolkien’s model but George R R Martin has given us twists, open or unusual relationships, violence and all shown or written, quite graphically. If Mary Whitehouse was still alive she would be writing to complain like a fury. 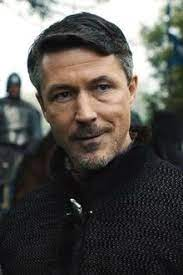 The rounded, yet human and flawed, characters are based in part on real events and characters from Medieval Europe and the Middle East. This even boils down to the role that they play. Take for example the King of Westeros, he still has a council, not able to rule on his own. First is the hand of the king. He is the right hand man who does the King’s dirty work. He is the chief advisor and in many ways holds all the power. Whilst the King has fun, the hand sees the kingdom is running smoothly.

Next is the Master of Coin. This is a role that no one really wants. It starts with the nefarious, scheming and treacherous Littlefinger, who also runs several questionable businesses and is syphoning of cash. The job is also Tyrion Lannisters for a while but given as an insult.  The show ends with Bron in charge who is the dodgest of the lot.  Swindon Bookkeepers Chippendale and Clark would have happily done it for them. They are the perfect Swindon Bookkeepers to keep Kings Landing on the straight and narrow.